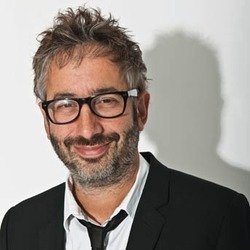 When I knew that David Baddiel was playing the Fringe I was determined to get the review ticket. A desire no doubt fuelled by a certain nostalgia for my teenage years: I adored ‘The Mary Whitehouse Experience’ and when that ended I moved on to watching ‘Newman and Baddiel In Pieces’ religiously. Comedy was the new ‘rock’n’roll’ and Baddiel was at the forefront, being one of the first comedians to play big arena shows. Heck, I even watched ‘Fantasy Football’ even though I had a dwindling interest in the sport.

Viewed from today’s perspective it’s easy to forget just how big a star Baddiel once was. Indeed, nowadays I’m far more familiar with his wife’s work in ‘Peppa Pig’ than I am with his more recent output. But, since I never got to see him at Wembley, I figured that this show at the George Square Theatre would fill the Baddiel shaped hole in my life.

I don’t think I’m being rude when I say that he ‘was’ a big star, because it’s that very idea that Baddiel sets out to explore in ‘Fame: Not The Musical’. Through a series of anecdotes, Baddiel relates to the audience the various pitfalls that someone encounters whilst wearing that tricky label of fame. There’s a section on Twitter in particular which seems to pinpoint the very problem that many famous people find when they are trolled – namely the lack of empathy the attacker has towards their victim. Celebs aren’t seen as real live people, merely vessels into which someone can pour their anger. Having followed recent high profile events on the social networking site regarding trolling this section was particularly timely and struck at the heart of the matter far more cleverly and concisely than the half a dozen blogs I’d read on the topic. It was also far funnier.

Having confessed that he hasn’t performed a full-length stand up show for 16 years, Baddiel seemed remarkably at ease with the audience. At times this meant that he underplayed a couple of his punchlines and the laughs fell a little short. However, that didn’t stop this being an entertaining and, above all, interesting show. From someone on the inside of celebrity culture dropping names such as Andrew Lloyd Webber, Ricky Gervais and Russell Brand didn’t seem like showing off. Baddiel has more than enough charm to make these names, these people, himself, seem down to earth and normal. Which I guess they are. They just happen to be on the telly a lot.

I’d say that if you’ve ever been a fan of Baddiel then this is a show that you should definitely see. It’s not quick-fire, gag-a-minute stuff, but it is immensely enjoyable and well worth an hour of your time.

Chris Fitchew in Jack of All Trades 4 Stars ****