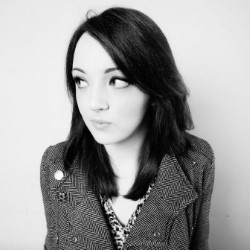 Fern Brady is an angry young woman. She is even going through anger management for this. Is it her hair colour? Her being Scottish? No that is racist. She just is.

Now living in London this West Lothian comedian has her own method of dealing with her friends that mimic her accent, she is opinionated except when it comes to politic s but prepared to give it a go back at Referendum time.

She is self-deprecating about her appearance, especially her eyes and hands, even her height, talks about mental health issues and meditation therapy.

Pet hates include yummy mummies invading her favourite coffee houses with offspring having babycinos, women significantly taller than their men and man spreading on public transport.

Ms Brady is an erudite performer and compelling to watch. She has written and performed this show with style and stamped her authority all over it. She wants to get herself a Radio 4 series so who knows there is load s of potential here.

Her scripted finale of a text conversation with a foot fetish guy is a suitable ending, it does rely on an audience member’s input which could be patchy but the guy I saw was brilliant.

I’m sure we will all be seeing more of Fern Brady over the next while and I look forward to it.