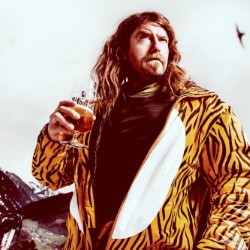 If anything, most Fringe shows tend to start a little late if anything. I thought I had seen most openings to a show so was somewhat taken aback when fully 15 minutes before advertised start time Craig Campbell appeared from back stage and started wandering around the audience chatting to one and all finding out stuff about everyone, presumably to refer to later. This went on for quite a while and gradually he drifted to the stage and we were off.
This was not the Campbell of old. He is still the bearded, short wearing hairy guy but he seems to have reined in his wilder traits.
He sips his tea on stage and the relationship between this, coffee and customer service in the UK and in the Americas occupies a fair chunk at the top of his set. Campbell is a well-travelled guy and has plenty of local and international references throughout his hour plus. English Publicans, Scottish drinking culture and accents together with colloquial words are well observed and delivered in a laidback style. Like a good pro he keeps the best couple of stories, a Russian trip and the drunk solo skier to round off his time.
A good show in the company of a nice bloke.
***
Reviewed by Geoff
22.00 (officially) to 23.00
Until 28th (not 15th)
Stand Comedy Club

Gary Delaney: There’s Something About Gary 5*****