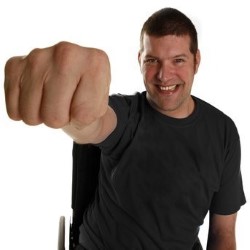 Way back in January when the show titles are selected Clark chose independence, and what an inspired choice. Although primarily about his own abilities there is also the political events of recent months as well to give this engaging comic subject matter for his 2016 Fringe show.
Although suffering from cerebral palsy and using a wheelchair Laurence does not let it impinge on his life, he is a family man with a wife and two kids, has a degree and is an accomplished stand-up, touring the world and entertaining wherever he goes. So why is he subject to social workers he muses?
He has a wicked dry sense of humour, often very self-deprecating. His well-constructed set, occasionally illustrated by images of his life and showcases his extensive comedic talents to royally entertain his crowd. There is material on his travels, family, Daniel Radcliffe, his earlier life to mention, just a few of his subjects, and how all these things came together to make him the very funny guy he is, despite of the assistance of Canadian Vicky, a social worker.
Although this was the opening night Clark delivered a well-polished hour of laugh out loud comedy material and has set a high standard for the rest of August.
****
Reviewed by Geoff
The Box Assembly George Square
19.00 to 20.00