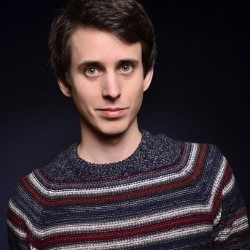 When a comedian is threatened with being killed by an enraged punter on the opening night of the Fringe it would seem logical to assume he is a brash lippy specimen. Yet Chris Stokes is anything but. However, the threat occurred.
Stokes looks about 16, although he is over thirty and divorced. He is, in my opinion, an inoffensive guy, slight in stature and a vegan to boot. But what he lacks in physical size he more than compensates with his well-constructed, funny set and his ability to interact with his audience, going to the trouble of speaking to us all individually.
Stokes is attempting to get back in the dating game again, trying with internet dating on tinder with little success but it does give him material for this hour, together with being a dog lover, and he has an interesting hypothesis on what makes them manipulative, the Ghostbuster remake and his uncle’s funeral. He has lovely observational stuff intertwined with his personal material and the entire hour is a gently pleasing experience.
When I saw him last year I was not totally convinced, but this is a much sharper hour and I look forward to seeing next year’s show
****
Reviewed by Geoff
20.10 to 21.10
Underbelly Clover
Until 28th (not 15th)