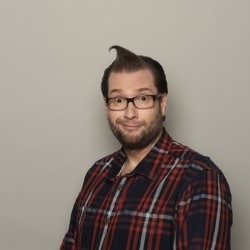 Well known to this sold out venue from his appearances on Mock the Week and previous visits to the Stand Comedy Club, everyone knows what to expect from Gary Delaney. His shows tend to follow the same format lots and lots of one liners coupled with lots and lots of laughs.
He breaks up the show with VT footage of observations he has made while travelling around the country such as amusing road signs or dodgy restaurant names. He also likes to try out his more risqué jokes, he says, to check how well they’re received. Of course they all go down well and some he doesn’t even have to finish, due to the intelligence of the Fringe crowd. Quite a smooth way of buttering up the audience.
Gary clearly enjoys what he does and can’t help but laugh at some of his own jokes which endears him to the crowd even more, it’s good that everyone is enjoying themselves.
The mischievous little boy inside him also likes to mess with Wikipedia quite a bit and update entries to see how long it takes the administrators to notice. He shows a number of very funny examples of these. The hour goes in a flash and there’s been laughter in the room from start to finish well worth a visit, if you want a seat get there early.