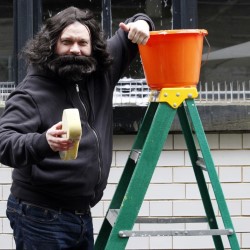 Gavin Webster is a Geordie comic who has been plying his trade for 23 years he tells us but has built up no following. I think the guy protesteth too much. Every time I have seen him there is a packed out room and why wouldn’t there be? He always delivers a set that is top notch and his stage presence is immense.
Famed for his ‘original titles’ Gavin show us a collect of his old show posters that have predicted the future!! And we are off, strapped in for the ride that he takes us on.
He is loud, he relates the stories he has to tell at full throttle, garnering more than enough belly laughs for two or more shows. He is a natural raconteur, sometimes a little irreverent, but hey who cares it, is soooo funny right?
Webster is a comedian’s comedian. The show I saw had several in at the back watching and each and every one of them were laughing as loud and hard as the rest of us.
So to find out why Jesus is now a taxi driver and what happened to Jeffrey from Rainbow, both according to Webster have had career changes, and have a cracking hour get yourself along to Stand 2
*****
Reviewed by Geoff
Stand 2
19.10 to 20.10
Until 28th (not 15th)