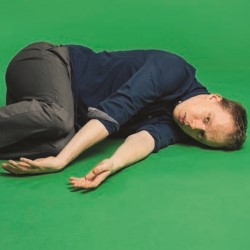 I’m very disappointed that Jordan’s audience hasn’t found its way to his show yet. There’s an audience for almost all comedy, and the right one brings an extra frisson to a show. There were more right audience in this show than when I saw him last year, so at least that’s an improvement. The four people in the front row who just didn’t get it made it all the funnier for the people behind them who did.

This show feels looser and less tightly controlled than last year. While there was definitely no improvising last time round, I’m genuinely unsure this time – mostly because everything he does is so very far out there that it’s really difficult to tell what’s rehearsed and what’s not. Dealing with hecklers gives no indication of what to look for. Maybe this is what it’s actually like in his head.

So while this show feels looser and less controlled, Jordan has lost none of his ability or desire to make the audience distinctly unsettled and uncomfortable, and it’s given him an extra weapon. In addition to all the weird stuff he does (trying to get comfortable and ending up with one foot on a bar stool and the other half way up a wall is the least of it), there’s now also this menacing undercurrent of perpetually imminent chaos. There’s no solid foundation to stand on, and you’re never quite sure which version of Jordan to believe: which ending of the anecdote holds the grain of truth, which of his stories are real life, or where it’s going next. Every time you feel like you’ve got a handle on it (the show, Jordan, his comedy) it morphs again and you’re left wondering again what the hell just happened.

For this man, comedy exists in that space where you’re made so uncomfortable you laugh because you don’t know what else to do. Some people don’t enjoy that experience and those people should avoid this show. For the boundary pushers and them as lives on the edge: enjoy.