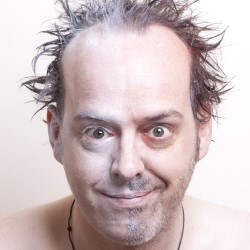 There are a whole load of shows with a shit title, just that mine admits it is one of Seymour Mace’s opening lines in his 2016 experience. It could be called a show but it is more than that.
Self-proclaimed niche comedian amiable Geordie Mace had a good 2015 being nominated for the Comedy Award which was a refreshing change as this year’s version is as good as the previous one.
Former clown Mace has a delightful mishmash of comedy, games shows with crazy questions, puppets, singing, re-enactment of dates, the what is he gonna do with the open window this year section, bananas… the list goes on.
Mace of course is not just a children’s style entertainer he is a genuinely funny man, and does have his issues too, which do get an airing.
Seymour Mace is unique, who else prefers to have open curtains, even the windows too throughout. Who would attempt a beginning or an ending like he does? The rule book isn’t something that means much to him.
But do go and see him. I will be very surprised if you leave without having a great time and leave with a broad grin on your face.
****
Reviewed by Geoff
Stand 2
14.30 to 15.30
Until 28th ( not 15th)