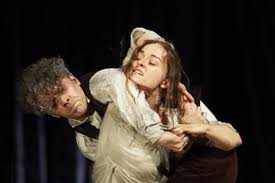 This is one of the strangest, most surreal but beatiful and exquisite theatrical works that you are ever likely to experience.

James Thierree leads a company of world class performers who combine acrobatics, physical theatre and clowning enclosed within a spectacular steam punk stage set to create a magic world where nothing is as it seems.

Thierree plays an inventor, a vast series of hanging sculptures hanging over him – the power broken, the lights not working as they should. He becomes obsessed with resolving the issue – becoming completely in thrall to the machine and neglecting in the process his wife (a show stealing performance from Valerie Doucet)who constantly tries to engage his attention only to be rebuked or forgotten as he returns to his new passion- sorting the light conundrum. This forms the background to a series of set pieces, some beautiful, others comedic which allow Thierry and his talented cast to show off the full range of their skills. All this is set within a haunting and compelling soundscape punctuated with the soulful interjections of Mariama who glides across the stage, within but apart from what is around her.

This piece is playful and fun. Brave and different. Bravo to the French government for funding such pure artistic ventures which allows such shows to exist.

The Guilty Feminist With Sofie Hagen and Deborah Frances-White 5*****