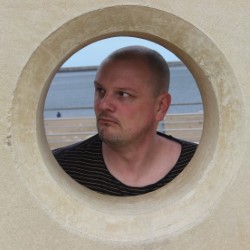 Mr Kyle also does comedy for children, and you definitely get a sense of that in this show: a grown man doing and saying relatively ridiculous things on stage with the sole aim of making an audience happy for an hour. There’s an innocence to the show and the air of an ingénue about Lee that’s quite endearing, and by happy coincidence, really rather funny.

Lee’s own words probably sum up the show best: dicking around on stage. Except he says it with his own marvellous accent and it sounds much better. The show isn’t stupid however, and there are some whip smart jokes and comments amongst the whimsy, along with some stuff that verges on the dark, and other bits that flirt with the edge of acceptable.

Mr Kyle is confident and personable on stage, with a good grasp of the structure and craft of performing his show. It would be good to see him find more of his audience, because that reflective atmosphere would take the show to the next level.