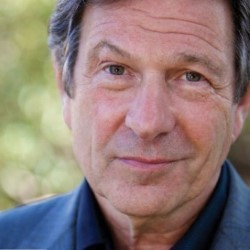 Although this show is listed under comedy / stand up in the Fringe brochure and I suppose Brandon did stand up for quite a lot of the time and yes it was funny at times also I feel it would be better characterised as spoken word.
In essence this is Michael Brandon, probably best known in the UK anyway for his 80’s role as Dempsey in the TV series Dempsey and Makepeace, it is a brief run through of his life and the number of off- ramps he took away from the main highway of his life and career.
Born and bred in New York, Brandon talks of his early life in a blue collar household, blagging his way into American Academy of Dramatic Arts along with some other house hold names, manages to wangle a great agent and Broadway and Hollywood beckon. He makes films with Diane Keaton, Robert De Niro, Kim Novak, Jacqueline Bissett and a whole host of others during his lengthy career.
The direction of Guy Masterson is evident throughout the piece, there are stills and clips played on a large screen behind him augment the interesting life he has lead, both professionally and personaly and it is certainly a nice way to spend an early evening hour.
****
Reviewed by Geoff
Assembly Room Drawing Room
17.55 to 18.55
Until 27th (not 14th)