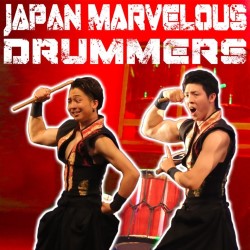 From the moment the Japanese Marvelous Drummers burst onto the stage in their beautiful red and gold costumes, they had the audience in the palm of their hands. This show is not just about the spectacular drumming – which is indeed marvellous, but on top of that we also have beautiful music from traditional flute and harp, tap dancing, drumming competitions and delightful interactions with the audience. The choreography was often breath-taking with drumsticks being thrown in the air and drummers playing their own and their neighbour’s drums in tandem. The group’s performance exudes energy and enthusiasm, but their slower pieces are a peaceful contrast allowing the performers (and audience!) to catch their breath before the next spectacular. Throughout the show the group encourage the audience to loosen up and join in the fun and by the end everyone was clapping along wholeheartedly. Their encore was a crowd-pleasing finale and the roars of approval were certainly well deserved. They deserve bigger audiences and I hope they come back next year – I will certainly be queueing up to see them again.
Reviewed by Rona
1.15pm
Assembly George Square Theatre

Robin Clyfan The sea is big enough to take it 4****