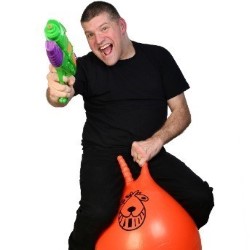 I have always found Laurence Clark to be a funny comedian, and one who has always had a story to tell in his own style, a winning formula of him talking and blending in video and big-screen visual gags and this is yet another example of his work, right out of the very top drawer.

The main thrust of his show is following his family, both Clark and his wife have cerebral palsy, featuring in a BBC documentary We Won’t Drop The Baby and analyses comments made on YouTube since it has been uploaded on there. Most are awful, and ignorant and Laurence was devastated, but who are the best people to judge what is being said, who better than his sons Tom & Jamie.

The way their kids answer all questions absolutely steals the show, it looks like this could be the start of a dynasty.

But that is not all on offer, DVD collections, Dr Who, holidays, new schools and maybe a few things that he has done in his life that may be classed as irresponsible.

This was an excellent hour, jam-packed with laughs and a delight to watch… even if Clark was occasionally upstaged by the lads.

Footnote: The show I saw his family were in enjoying it as much as we were. The look of delight on all their faces was a pleasure to behold.