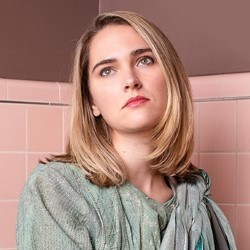 Jena Friedman returns to Edinburgh this year with Miscarriage of Justice some four years after her critically acclaimed 2015 show American C*nt. Since then she has had innumerable appearances on TV show across the pond.
Ms Friedman has poise and presence and strong opinions on American and world politics and has chosen once more to air these views at the Fringe as she feels she is safer saying them here than back home.
She isn’t afraid to name names, Trump and his administration obviously comes under scrutiny, strong statements about the NRA, pops at Brexit and Boris, you may love her nickname for him, I did. But there are also the Democrats who are not immune from her opinions either, nor are First Ladies.
There is a chunk of material on femicide in the US, the name Ted Bundy crops up from time to time as Jen expands these thoughts to watching True Life Crime on TV. Also the worrying rise of Nazis in her native land. The world is not a good place currently.
She looks to the future, may be 2020 could be worse.
If you are up in the American political world I think you would have got a lot more from this show than me, also I did find one or two of her stances a bit generalising. But that could be me.
***
Reviewed by Geoff
Assembly George Sq Studio 5
21.20 to 22.20
Until 25th (not 12th)