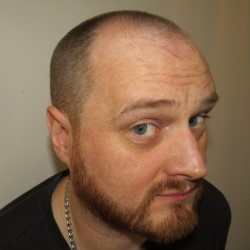 Ross Leslie has been gaining a reputation over the years as a talented comic who is always a safe pair of hands in comedy terms and having seen his show I can concur.
Leslie is a local guy, Edinburgh born and now living in Fife, so it is not all that surprising that some of his material does have local references but he is all inclusive and has universal appeal.
As a father of four Leslie talks about his wife and kids, having the snip, a proposed early money making scheme that failed, and the discovery that he and two of the family have autism. There are also well-crafted sections on date nights, a car accident his loving of tattoos and hilarious section on the use and cost of sex robots!!
Ross in an engaging and interesting comic, easy to listen to and has loads of laughs woven into his narrative.
13.15 is not the greatest time to watch comedy but he makes it well worthwhile, a good show, which this is doesn’t need a later slot to succeed. Go see for yourself.
****
Reviewed by Geoff
Stand 4
13.15 to 14.15
Until 25th