Any child of the 50’s, 60’s or 70’s, will hear Aquarius and think of the musical ‘Hair’ famous or infamous for introducing nudity to the stage. Sorry to disappoint but the Deep Blue Theatre’s presentation is totally void of voyeurism.  It is instead a very good ensemble presentation. It covers the subject of flower power and the draught in America forcing youngsters to fight and be killed in Vietnam. From the bright costumes, colourful makeup, flowers everywhere and use of stimulants artificial or otherwise this show has all the hallmarks of professional productions, with some nice touches I hadn’t seen before. The whole cast is very good some obviously getting into character more than others. This is a great way to get some love man, protest about war and love thy brother and sister. **** The Principals: Claude – Tom Gatley who dreams of being from ‘Manchester England, England’, and is trying to dodge the draft. Berger – Sam Ross, the leader of the gang, always looking for his ‘Donna’. Sheila – Claire Palmer, nominally Berger’s girl, usually the instigator of protests and the welcomer of the dawning of the ‘age of Aquarius’. Woof – Kieran Pugh, peaceful lover of everyone, Jeanie – Rosalind West, Chrissy – Naomi Hudson, Dionne – Jairus Obyomi The tribe: Alex Hodgson, Barry Gibney, Emma Stephany, Gareth Jones, Heidi Browne, Kelly McAree and Miranda.   The band: Andrew Bisgrove, David Allen, David McCartney, Elizabeth Gywther and Owen Elton. 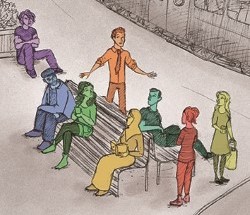