Peter Straker has been around for almost as long as I can remember mostly I have seen him as a musical theatre performer, but the show he is doing at the Fringe this year is more an homage to the great Belgian songwriter and performer Jacques Brel.

Straker is a fan, he is not trying to be the man, just likes singing his songs and backed by an excellent three man band, and with the large screen playing actual footage of Brel himself, he very briefly gives the audience the life story which of course contains a selection of the best loved songs.

Straker is a born performer and is able to sell the songs, and the man himself for that, with his own touch, and a set littered with props plays out episodes of his all too short life.

The classic numbers were the best received Jackie, Matilde, Next, Amsterdam, the list goes on, but for me anyway the touching number ‘If you go away’ or Ne Me Quitte Pas was the best of the bunch.

Whether you are a fan of Brel or not this is a quality performance and attending could open up a whole bunch of different songs to you.

Michael Legge – What a Shame 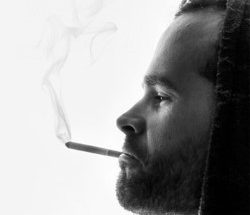