Tiddler and Other Terrific Tales - One4Review 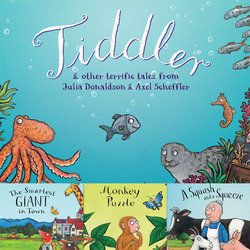 There are four of Julia Donaldson’s stories in this show, so while not every toddler will know them all, most will know enough to have a great time, and it didn’t matter whether or not you knew the tales.

Scamp Theatre aren’t new to adaptation of this author’s books, and do so with aplomb. Plenty of physical comedy, lots of laughs, and sticking reasonably closely to the original texts, though some devoted pre-schoolers may object to a few missing animals from Monkey Puzzle. It’s a pity it’s set on the Udderbelly’s three sided stage, as side audiences often lost sight of the action.

The stories weave together by using the cast to help the monkey to find his mum (with butterfly, of course). Every so often he gets tired, and they tell another tale while he rests. These include a Squash and a Squeeze, with minimal set redesigns for the pokey house, Tiddler, of the title, with fishermen telling the tale, and then the Smartest Giant in Town, who gives away his things to help others.

So by the finish, it’s happily ever after all around, including all the small audience members, who even get a Tiddler bag-for-life to go.

(Editors note: The same show is being repeated in the 2013 Fringe. Review has been re-published, but we haven’t double checked any gifts this year!)

The Snail and the Whale