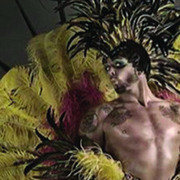 From start to finish this is a show which is action packed male cabaret performed at its very best. The six guys who form the ensemble are gloriously camp; their physicality is amazing and their precise timing of every movement is achieved with such style and apparent ease.

They open with a choreographed fan dance routine, items of clothing are discarded and it builds up to the guys appearing in their briefs. Essential to the whole show is the integration of music and lighting to give the full visual and aural experience. Routines follow in quick succession showcasing the individual comedy and physical skills of the performers, from ballet to the most inventive trapeze routine I have ever seen.

With each routine, there is plenty of whooping and clapping from the audience and the guys are happy to pose and posture and flaunt their magnificently honed bodies. The costumes, and indeed the thongs, are fabulous creations.

The delight about Briefs is the total unpredictability of where they are going to go next. Yes, it will be camp, but it could be based on comedy or the physical strength and co-ordination of a circus type routine given a new twist. Wonderfully entertaining!