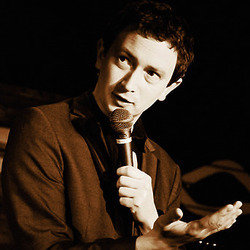 Matt Green is a comic who has been around for a while, in fact I first saw him perform in 1999 while he was still at university and over those years something has been consistent is the way he always delivers a well thought out show, packed through with very funny material, something he has certainly done again this year.

There is no ranting in any shape, just his somewhat laidback style while delivering his hour based around a list he became aware of about people dying in the UK, while telling one and all about some his life history along the way.

There were some unusual causes of death highlighted during his set, and many were compaired to his personal life and circumstances with anecdotes on his health, bee stings, eastern European conveniences, flying and the use of language as stopping off points. Although he had statistics a plenty at his fingertips this was never going to come across as a lecture, just a genuinely funny guy chatting away to a full room, and I don’t think anyone could have left feeling offended or short-changed.

Ballad of the Burning Star