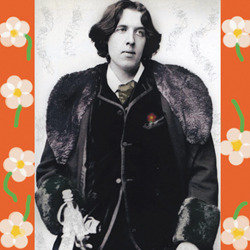 We arrive at the venue to find a young lady playing a recorder, while an older gentleman does magic tricks for the audience – and this is before we even get into the Yurt for the performance.

Once inside, the audience is seated around the outside, leaving the talented cast playing in the round. These are the two already mentioned, but as there’s a need for more characters, many of the audience get to join in too, from saying lines from the handy cue cards, to blowing bubbles, or howling as the wind.

The shows and casts vary on alternate days. We saw The Young King, The Selfish Giant, and The Happy Prince. We’re hoping to make it to their other offerings, as if the other cast has even half of the warmth and enthusiasm of this one, it’ll be well worth the effort.

Wilde seemed at first glance to be way over the heads of a lot of the very young audience. But actually, the stories are so sweet, and told so engagingly, with a few props, a lot of audience involvement, and a whole heap of gusto, that even the odd lorry past the Yurt drowning out a shyer child’s line didn’t spoil the obvious enjoyment of the whole audience – and cast.