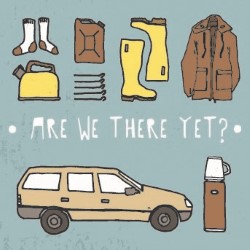 Derek Johnston is a local comic so I have seen him numerous times in the past but never in an hours show. So having been to the toilet made sure I had got my water as instructed by ‘dad and mum’ and strapped in, I and my fellow passengers were off on a journey led by Derek, an hour of experiences he shared of his family holiday experiences and trauma along the way.

Derek’s family either went to France or the West of Scotland so there was always a lot of car travel involved usually in vehicles adapted by his inventive father where journeys were spend listening to the cassette tapes, all three, and playing a variety of car games to help pass the time, a flavour of this he instigated within the totally sold-out crowd.

It is a testament to his comedy talent and appealing nature that everyone went along with him really joining in and there was not a soul who could possibly have left the show without a smile on their face.

All in all a delightfully silly show that is the perfect start to a Fringe day.