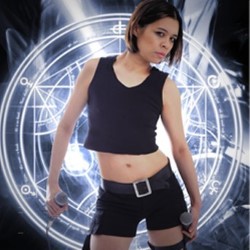 Taboos. There are plenty and they are things that people are not allowed to say or do. At least that is of course if you are not Ria Lina. No she is determined to tackle a load of them head on in her 2015 Fringe offering.

She may be small in stature but large in talent, Ms Lina talks at a machine gun rate giving her take, and occasionally offering her solutions to the ever changing world of what causes offence.

She expounds on many subjects, Christian beliefs, female comedians, Middle East eating, Paralympics, Political correctness, racism, body image, feminism and Max Clifford amongst other ports of call, generally gently finding the funny side, tackling thorny issues and making one see that there is another way of viewing things.

She has a pleasing delivery, a well written and researched set and has multitude of laughs packed into her hour including quite a number of out and out belly laughs judging by the audience I was part of. She does make you think, but never pushes it too far.

Check her out. Head for Stand 2. It’s a show definitely worth starting off the Fringe evening.

Adrienne Truscott – Not A One Trick Pony 2**