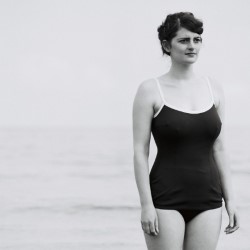 Alice Mary Walker’s engaging performance takes us to two vibrant locations; the ocean of Australia’s eastern coast, and the inner world of a young girl, obsessed by the water and its teeming life. However the play starts with the faintly ridiculous image of this same girl, Elizabeth Moncello, now a nonagenarian resident of an Edinburgh hospice, swimming naked at midnight with a “pool noodle”.
The tale between these two points unfolds like an oscar winning movie script. Elizabeth grows up on an island of just twelve non-swimming inhabitants, surrounded by nature and the great ocean. Her life and relationship with the water is transformed when the waves take her little brother, yet grief and rage transmute into wonder.
Walker’s direct and passionate story telling eloquently communicates Elizabeth’s gnawing frustration with her inability to swim and her growing determination to master the sea. She decides to learn by mimicking the techniques of the creatures she observes, at first with perilous consequences.
The tone of a tale in which fish, penguins and dolphins become a young girl’s tutors, could in less capable hands become mawkishly sentimental, yet here instead the account feels gritty and real.
Her discovery by local press, recruitment to Australia’s Olympic swimming team and victory in Berlin form a conventional ascending story arc, and it is at this point that the play pulls a emergency stop. The outbreak of war blighted the hopes of a generation, but for women, particular modest ‘sensible’ women like Elizabeth, the quiet laying aside of personal ambition has largely gone unrecorded and unmourned.
The true poignancy of this simple but moving tale lies not in the surge of victory but in the gentle sacrifice of ambition.