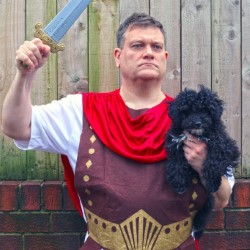 Gavin Webster is a comic I always have a lot of time for. This no nonsense Geordie is always high on my list of acts to see during each Fringe as he is always value for money.
With an opening that he claims no one else will have on the Fringe, and I’m sure he is right, Webster is straight into his material and as always a well thought out hour follows.
He is Stand-up. He tells jokes. Not the observational stuff for him, that’s for ‘the kids’. Gavin has a few things he dislikes too. The pretentious ‘so called brigade’, the UK’s ‘Celebrity’ scene are high on the list. His segments of footballers versus NHS staff went down well with the crowd, as did people liking stuff ‘ironically’.
Webster has takes on the Geordie version of The Ladyboys, late comedy legend Ken Dodd and he also serenades us with a musical number or two along the way. Also his hilarious story loosely based around AC/DC which was a fitting climax to the extravaganza.
The audience I was part of was a little subdued, but given a more responsive group it would have been even a better hour than it was. And that’s where you come in.
****
Reviewed by Geoff
Stand 2
18.20 to 19.20
Until 26th ( Not 13th)