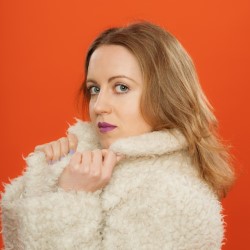 Annie McGrath holds the room with the ease of the seasoned performer; polished and with poise. She could use the crook to keep control – and I was particularly amused by its casual employment for emphasis towards the end – but she doesn’t need it.

There’s an overarching narrative arc in this show, encompassing smaller related stories and diversions into worthwhile funniness, including regarding spinach. Lots of the show is focussed on Ms McGrath’s experiences of three ‘creepy men’. They are indeed dead creepy, and quite, quite unacceptable. It also might not feel like an acceptable thing to write comedy about, but presented like this, it absolutely is. Ms McGrath ridicules and mocks their creepy behaviour, calling it out for the aberration it is, rather than laughing at the situation in order to make it feel normal, and normalised.

Ms McGrath delivers a well-judged mix of seriousness and silly, making good points without veering into sermonising or utter horror. She even manages to make ‘reading out funny tweets’ into a higher art form with her pithy commentary. This show is solid, well-crafted story-telling comedy, with flights of whimsy, ribaldry and sharp politicism, delivered by a consummate performer. What else could you want?

Susan Murray: How Not To Die In A Plane Crash 3*** and a half