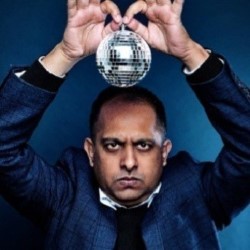 Anuvab Pal covers topics from Empire to Brexit, skin colour and assumptions, to politically over-correct audience members getting angry on his behalf.

He then turns to the Bollywood Film “Disco Dancer” – a famous / infamous film in India. Somehow describing a film in detail, plot point by really random plot point is way funnier than I would have imagined.

Using audience members to play the roles – not really doing anything, but successfully working as a reminder as to who was who at any given point – Pal weaved this strange tale, full of bad disco dancing, kidnapping, learning disco dancing, rivalry, successful disco dancing, murder plots, and a spot of disco dancing to the death.

The point is that the film’s director took Pal to court over his – some would say positive – comments about the comedy, or possibly tragic film. Meaning he needed, in court, to prove his expertise…

You do not need to have seen “Disco Dancer” to enjoy this film. I even have a sneaking suspicion that it cannot live up to the laugh a minute explanation we enjoyed.