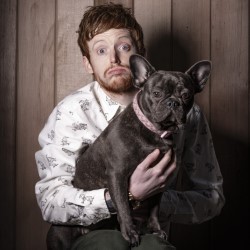 Robin Grainger has been around the comedy scene in Scotland for a few years now and although is now Edinburgh based hails from a village in rural Aberdeenshire and references the contrast in the two places in his icebreaker material up front, he also has self-deprecating material on his appearance and this topic reappears occasionally throughout the hour all to good effect.
This really is a lot about him ‘coming of age’, his progression from the sticks, sharing a flat with his stoner brother, moving out and meeting his girlfriend, and how holidays have changed to include city breaks, the acquisition of his French Bulldog and his rising profile in the comedy world are subjects Grainger shares with his audience, confidently entertaining, with plenty of gentle laughs along the way.
His audience interaction is good and effective, also non-confrontational, one of these leading him into a section about a working trip/ holiday to South Africa and the problems encountered while there, were recounted eloquently, raising laughs throughout at his descriptions.
Robin’s crowd on the day I attended where not the most vociferous but the gig had a nice relaxed feel to it and it was a pleasant way to spend a Fringe afternoon.
***.5
Reviewed by Geoff
Stand 4
14.25 to 15.25
Until 25th