Phill Jupitus is Porky the Poet in Zeitgeist Limbo - One4Review 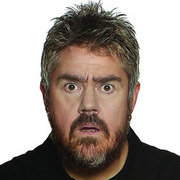 Don’t go by the show title, or what the fringe blurb says, that’s not what this was – but as the man says, it’s a free show (also, he’s Phill Jupitus) so he can do what he wants. It didn’t matter, this was still a delightful show.

If you’ve been to poetry readings before, you’ll know what to expect: a poet giving short introductions to or explanations of thier poems and then reading them. Mr. Jupitus clearly gets a lot of enjoyment out of performing, and his poems are pleasing and thought-provoking (although the intros might be longer than the poems). He has a really good voice for this sort of thing, which is complimented by the exceptionally good sound system.

Mr. Jupitus was totally at ease and entirely in control of the audience, of which a significant part weren’t entirely sure what they were there for to begin with – but certainly weren’t complaining at the end either.

A really lovely relaxed show, and it’s free. Mr Jupitus himself was holding the bucket at the end.