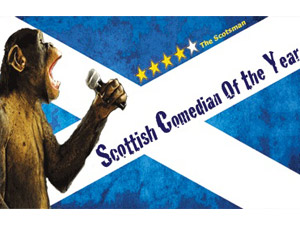 For years now Alan Anderson’s Ha Ha Comedy Organisation has been running this competition for the up and coming comedian in Scotland and with a wealth of prizes available for the winner it is hardly surprising that the entry list is rather large. Over the last few weeks Anderson has seen all of the entries and the best have progressed through heats and semi-finals to reach the final eleven who made up the finalists.

Our host for the night was Glasgow’s own Des Clarke, comic, radio presenter and panto star who had the task to warm up huge audience in the vast venue and also introducing the esteemed judges including former winner Mark Nelson, Chortle supremo Steve Bennett, Get Comedies Brett Vincent amongst others.

The formalities out of the way it was time to meet the contestants and opening act Ally Houston started the competition off in his inimitable style. Houston is anything but an intimidating act, his quirky somewhat seemingly awkward delivery may not be to everyone’s taste but the majority seemed to go with him as he performed his occasionally unusual material.

Larger than life Ross McLellan hit the stage next to the Rocky theme, even sporting boxing gloves, a multitude of tee shirts and a whole host of props to illustrate his performance. He is a commanding performer and had a wide diversity of subject matter. I feel he will not be short of gigs in the future.

Andrew Learmonth had the task of following next and had a much more laid back style yet a well thought out and delivered set. Some of the stuff went to slightly strange places, but the confidence and presentation and the generally high standard of material made him a hit with the audience.

Closing out part one was another Glaswegian in the shape of Alan J Park. Park has a pleasing personality and a whole raft of funny local based material. He certainly struck a note with the crowd and generated a load of laughs throughout his all too short set. Certainly I could have stood for a whole lot more of what he had to offer.

Opening up part two was Chris Davis. He certainly packed in a whole load of stories and gags into his set, be it about living in Germany, translations, cats versus dogs and a really funny segment on self-service supermarket checkouts. Davis is entertainment with a capital E.

A slice of character comedy was the next offering from ‘Amanda Moffat’. This ’48 year old divorcee’ had an interesting repertoire of material including impressions. Maybe this wasn’t the forum for this sort of act but I felt that it didn’t go down so well with the crowd.

Gareth Waugh, fresh from playing Edinburgh Playhouse as part of Radio Forth on the Fringe, entered the fray and as usual did his well-timed and thought out set. Waugh has had a good year and it is easy to see why. Maybe it was the East –West divide but I felt the predominantly Glasgow crowd were more up for the locals but he did his reputation no harm that is for sure.

Allan Lindsay, a private hire cabbie from Glasgow closed out part two. It was the first time I had seen him but wanted to see far more than his time allowed. He had presence, material with plenty of variety and belly laughs and great comedic timing. I’m sure he will have a very successful career in the world of comedy and look forward to seeing him progress.

The final segment was opened by Larry Dean with a set basically about being a very non-typical Glasgow man, and a gay guy to boot. For me he grabbed the already good gig and moved it to another level. He had an endearing personality, a wealth of laugh-out loud gags and stories and his time was over way too soon for us all. I know he will go far and I want to see a longer set now!!

Local favourite Suzie McCabe was the penultimate act. Now I have seen her a couple of times recently and it was good to see her with a completely new set, but one packed with gags. A fair part was about her recent civil partnership, but there was plenty of other subjects that got discussed too. She certainly was very popular and it was easy to see why.

Last but not least the large hairy man that is Ben Verth closed the competition. I have seen him perhaps more than any of the others and as always he sold himself and his set with his usual aplomb. Perhaps it was the divide striking again or perhaps it was that the audience were beginning to get comedied –out but I don’t think he got the acclaim that he deserved. 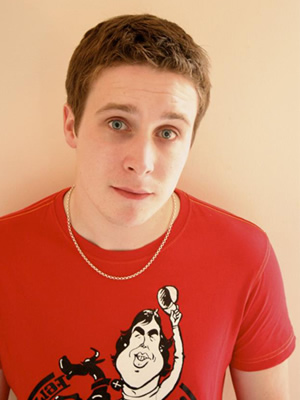 So that was it. A brief interval whilst the judges deliberated on the winners, and once this was decided Alan Anderson presented the winners and runners up with their awards.

Oh the results I hear you say. Okay 3rd was Suzie McCabe, 2nd Andrew Learmonth and the winner of the trophy and the astounding prizes was Larry Dean, a worthy winner in my opinion.

It was good to see the standard of Scottish comedy is as high as ever and the organisation by Anderson and his team together with Des Clarke keeping the show more or less on track should be praised for staging this evening. 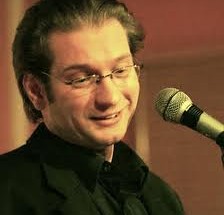