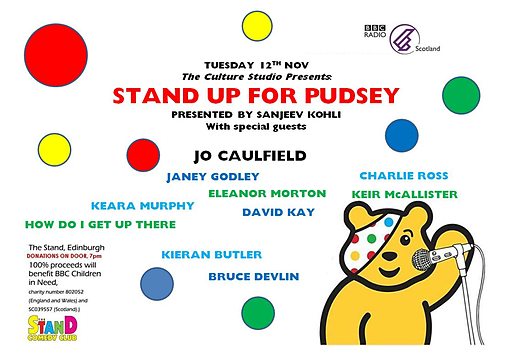 Every November for almost as long as I can remember The Beeb has staged the Children in Need extravaganza to entertain and more importantly raise money for this worthwhile cause. All parts or the organisation get involved in the push and with Radio Scotland’s The Culture Studio recording a stand-up special for broadcast on the day at Scotland’s number one comedy club, The Stand in Edinburgh, it was a nap that the line-up would be stellar, the club would be packed and hopefully a good deal of money would be raised into the bargain.

And the comedians I hear you say, well we had an eclectic mix, sketch troupes ‘How Do I get Up There’ and ‘Endemic’, some rising stars Ally Houston, Andrew Learmonth, Richard Melville and Eleanor Morton together with a whole host of favourites such as Charlie Ross, Keara Murphy, Julia Sutherland, Jay Lafferty, Keir McAllister, Jojo Sutherland, David Kay, not forgetting Janey Godley and headliner Jo Caulfield.

All in all the recording took three and a half hours, which somehow will need to be edited down to about half that prior to broadcast. That in itself is an almost impossible task given the quality of material presented, but I look forward to hearing what made the edit on BBC Radio Scotland on Friday lunchtime.

It was of course a great night with plenty of laughs, but the real reason obviously is to raise money for Children in Need. Why not check out the website www.bbc.co.uk/pudsey and checkout the many ways you can donate to this charity. 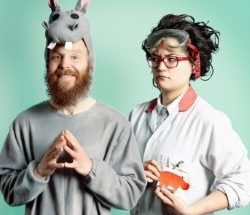 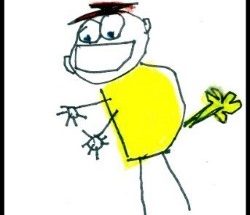