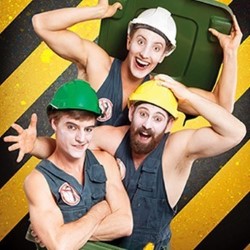 The Trash Test Dummies is a children’s show unlike any I’ve seen before. Best described as a mixture of comedy, circus, acrobatics and downright silliness, this show had my daughter and I laughing, gasping and clapping throughout.
Before the show began, the three performers were in amongst the audience, stealing snacks and taking selfies with stolen phones. Once on the stage it was impossible to take your eyes off them. They are incredibly talented acrobats, and the children and adults loved them. Their stage set up is very simple as it is just the three performers and a wheelie bin each, which they use during various tricks.
It is refreshing to see such a slap-stick silly show. There is very little talking in the show which only enhances the circus like experience. There was no low point, and the hour flew by without a single glance at my watch.
It is difficult to know who enjoyed it most – the children or the adults. Glancing around the audience, everyone appeared to be having a great time. It is slickly choreographed and the talent of the trio shone throughout.
Overall, if you fancy a silly but highly enjoyable children’s entertainment, I cannot recommend Trash Test Dummies highly enough. 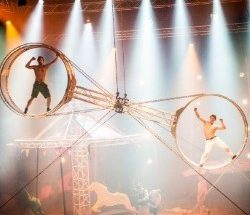