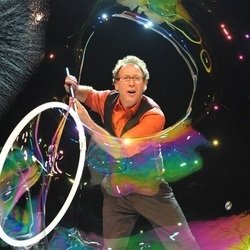 Louis Pearl, aka The Amazing Bubble Man, has been performing bubble shows for over thirty years, and was top of the list of shows for my five year old, who was very excited for the show.
I did wonder how he could fill an hour long slot with bubble tricks, but he certainly knows his stuff. Some of his tricks, such as the disco ball bubble, were amazing to see. His banter with the audience helps to keep adults and older children entertained, and he made good use of the audience by inviting children up to the stage throughout the show.
As you would imagine there is no story to the performance, just a series of tricks which while very entertaining for the youngest members of the crowd, may not suit older children. My five year old began to fidget towards the end of the show which at an hour is perhaps a little long.
Special mention must be given to Jet Black Pearl who provided live music throughout and assisted with some of his tricks.
Overall, The Amazing Bubble Man is an excellent show for younger children who are still excited by bubbles. There were plenty of gasps from the young children around me and my daughter certainly enjoyed it. 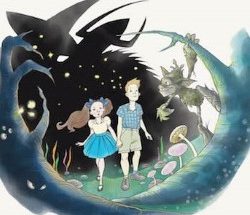