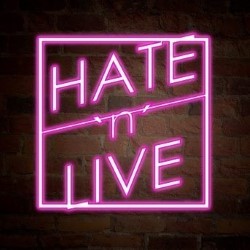 The concept of this show is just great. Comedians ranting about the stuff they hate. As opinionated creatures, this could be brilliant, but as a partly improvised show, this obviously depends on the wit, and writing speed of the performers, as well as on good audience suggestions.

Sadly, it didn’t fully reach its potential, possibly by trying to fit too much into too little time. In just an hour, we meet the host Darius Davies, have four acts, or “Gladi-Haters” tell us briefly about something they loathe, and then get a topic out of the bucket – from audience suggestions – to “hate on” when they return. On that return, they will also face some quick-fire hating, as new topics are pulled out of the bucket.

After all four acts have been introduced, with passable, but somewhat obvious targets of their ire, they start returning, and the varying skills in writing quickly are evident. Banter between the acts could be helpful, but sometimes drifts into the host enjoying the sound of his own voice a little much for us to hear the act’s material.

The final “Hate Off” between the two acts with audience cheers was fun, though Leo Kearse, as the act that shone throughout, was robbed by the final rap battle.