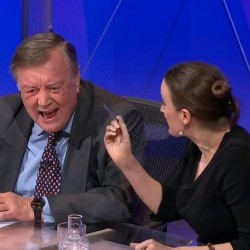 As someone with socialist leanings myself, Kate Smurthwaite’s show title was always going to appeal, though I remain unsure – as does she – as to exactly what a Cock Womble is, and whether those who called her this, during her appearance on Question Time, feel she’s doing a good job of keeping Wimbledon Common clear of unattended sexual organs.

Smurthwaite starts the show with some audience banter, but she’s far more interesting than the usual where everyone comes from – she’s on a hunt for the show’s biggest do-gooder.

The theme that emerges is words, freedom of speech, and where that becomes hate speech. From Frankie Boyle’s freedom to make certain gags, to Comic Relief’s freedom to edit; her freedom to comment on that, to the freedom twitter fans apparently have to send death threats in her direction.

Kate Smurthwaite is a brilliant comedian – and, if possible, an even better “radical cunt-wielding patriarchy smasher.”