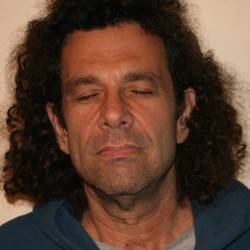 Al Lubel is an extremely funny, talented and clever comedian and it wouldn’t be an Al Lubel show without you hearing the mellifluous Al Lubel, Al Lubel several times, he also manages to fit his name into several other words or phrases to improve their sound.

Al Lubel is an only child from an overprotective mother who constantly worried he overdid things and he occasionally does throughout his set. Much of his material comes from his overthinking and neurosis with some great observations. He worries he won’t be funny enough, about suicide with a novel take on how this could be carried out, dying, living, sleeping, pretty much everything he does on a daily basis. He is able to stretch out a thought for several minutes, looking at it from every possible angle.

Having seen Al Lubel before I was slightly disappointed with his show, it’s still good with a lot of original material but there was quite a bit recycled from previous years. I also got the impression he was just coasting, waiting on the show to end and didn’t seem to get the same enjoyment from it. There were a lot of laughs throughout the show with some people in hysterics throughout. As a free fringe show it’s well worth going to see and worth a few quid in the bucket at the end to help him continue to live on another continent from his mother.

Nathan Caton: Straight out of Middlesex 4***