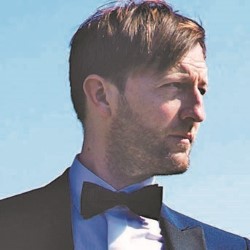 Andrew Maxwell informs us at the off that this is his 21st Fringe. Yes really. He must have a portrait aging in the attic for his appearance hasn’t changed at all. Neither has his comedy talent and his ability to entertain in style.

He claims he is too happy at present for comedy but will do his best. And of course his best is always good enough.

Maxwell is a self-confessed news freak and a fair amount of his stories are based around events, be it last year’s referendum, General Election, Euro crisis, Greece, Lord Sewell, same-sex weddings and police shootings in the USA. With as always an excellently written and well observed set, packed with enough laughs for two shows all delivered as only he can. He commands the attention of all the vast crowd in George Square Theatre, the odd couple of heckling situations are however firmly put down.

The finale story of a post Qatar gig he did has all the ingredients of his view that life is for living and is a suitable end to another fine hour. Here’s to the next 21 years.