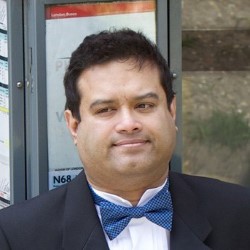 It has been a while, 4 years, since Paul Sinha brought a show to the Fringe, way too long in my opinion but he is back and as good as ever not that I ever thought it would be other.

I joined a sell-out crowd to witness this clever comic, maybe a percentage drawn by TV exposure. Sinha just oozes class throughout and his presence flows from the stage completely engulfing the club.

Sinha is of course well know from being a Chaser from ITV’s The Chase quiz programme but as well as being a qualified doctor, he has always been a top notch comic, able to relate anecdotes as well as tell gags, mostly in a self-deprecating manner.

Anecdotes about his visit to Parliament, comedy gigs in India and his family and sexuality give him more than enough scope for his hour, I am not alone I know in wishing it was longer. It was a set packed of well crafted stories, funny gags and ventures into  the ‘that’s what I would have said’ device were used sparingly and to good effect.

Sinha may class himself as a Z List celebrity but I can assure you he is definitely A list when it comes to being a comedian.