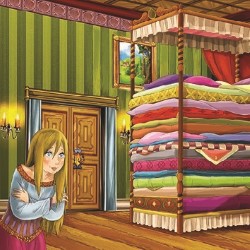 The simple, traditional tale of the Princess and the Pea is told nicely by this young theatre group. Five performers take on a wide range of roles, from the traditional few in the story, to a whole series of others added in for added plot depth, and for humour.

The group take turns to narrate, as well as to play most of the roles, except, of course, the sad, princess-less Prince Jethro, who this story is actually about. On his travels searching for the right woman, he meets numerous other fairytale characters, including quite a list of princesses, and the famous – but inaccurately named – Prince Charming.

By keeping it simple in terms of staging, the group kept their small, but eager audience’s attention throughout, and the young girls – and like-minded grown-ups – all had a lot of fun.

The same group also perform Jack and Molly and The Beanstalk a little later on, so you could consider making a morning of it.

Towards Dolly: A Century of Animal Genetics in Edinburgh 4****