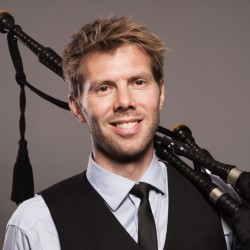 Claus Reiss is a genial character, at ease with the audience, his comedy and his bagpipes, mixing his skills with all three to present a pleasant not-quite hour. His comedy is fairly bagpipe based, both talking about them and his experience of them, and playing various pieces, including a couple of Claus’ own compositions.

This show isn’t brimming with material, but ambles along at a gentle pace with plenty of space for good-hearted audience interaction, and beer. Tunes are played for long enough to recognise, but not for so long that the show becomes a concert. While I might have liked more music, and perhaps a few more requests, the audience I was part of seemed to enjoy themselves and expressed themselves appreciatively.

Will Seaward Has a Really Good Go at Alchemy 4****