So That’s What We Voted For? Mark Nelson, Keir McAllister and Vladimir McTavish 4**** - One4Review 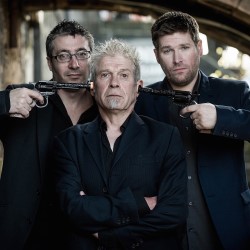 Mark Nelson, Keir McAllister and Vladimir McTavish have for a while been three of the stalwarts on the Scottish comedy scene and this is not the first time they have joined together to do this politically themed comedy show.

Of course there is subject matter a plenty for these three to get their teeth into, and all three make the most of the opportunity, given the recent referendum, the General Election and the change in leaderships that have taken place and they make the most of this looking at it through the comedy perspective, but making good points along the way.

It is not just Scottish politics however, there are forays into UK the US presidential bandwagon and even a taste of some Danish legislation that is on the agenda.

The three guys spark off each other and the camaraderie they share together with the well written material makes for an interesting insight into politics or albeit from their viewpoint. And there is a wee bonus to boot with a guest doing a few minutes to conclude proceedings.