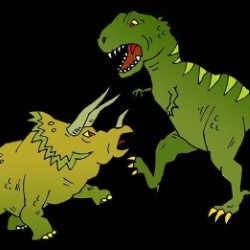 Storyteller Dommy B welcomes his audience to the strangest fringe room I’ve yet been in – pirate themed, with a caged skeleton hanging from the roof.

He then starts on the tale of Scarlet the Troll. She quickly makes friends with a young dinosaur – who appeared out of nowhere – and then has to defeat some grown up scary ones, before meeting a sneezey dragon, an out-of-control Goblin Wizard and a terrifying Spineosaurus Witch.

With parts of this in rhyme, including asking for audience suggestions, it is clear Dommy B is a confident performer, comfortable with his tale, and with a varied aged audience. The audience themselves were widely mixed in age range, and managed to respond with strange food suggestions, and incredibly accurate dinosaur names.

The story rounded up every thread of the tale by the – naturally happy – ending, and the audience were enchanted – clustering round at the end to buy his books and enjoy further tales.

Iraq Out & Loud: Reading the Chilcot Report in Full