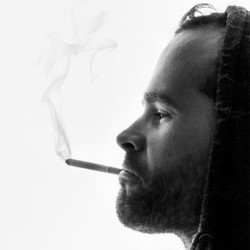 This one man show about Moko; homeless, vulnerable, on edge, fighting on, is exhausting, discomforting and ultimately one of the most emotionally engaging pieces of theatre you are likely to experience at Edinburgh this year.

We enter the space to find Moko on a blanket at the back, singing to us, stopping to banter as we come in, commenting on a t shirt, a smile, checking that we’re all right. This carries on when he comes to the front of the space – the interaction is strained and awkward, exactly as it can be as you walk past the men huddled on street corners or the girls on Waverley Bridge trying to catch your eye.

He sings us short bursts of songs ‘any requests?’and then goes tells us the stories of people he’s met. The longest thread within these stories is of James, an office worker, an ordinary guy and how he breaks up with his girlfriend, he tells is the story of the middle aged lady who lives alone and doesn’t see her son anymore. These fragments perhaps sketch in something of Moko before he became the man he is today. Being homeless could happen to anyone.

When he’s not telling us stories we join him in experiencing his world, a brutal and dark world over which he has little control and in which he is dependent on the good in others. There is little evidence of good – he is moved on, sent away and in a particularly mesmersing and chilling moment brutally beaten by a stranger. However throughout he remains stoic and positive, still trying to endear himself, struggling on.

If this all sounds unfeasibly bleak it’s not. There is a lot of humour and many (albeit some quite uneasy) laughs along the way. The audience take on the roles of various people he meets along the way which adds an interesting random element and the clever use of prerecorded voices make for a particularly hilarious karaoke duet.

What makes this work so well though is the quality and intensity of the performance. Tim Carlsson is exceptional – he lives this character, and as a result is utterly credible. His portrayal of Moko with his clenched hands, deep stoop, edgy energy and incredible expressive face is of someone we feel, uncomfortable with, scared of, yet someone with whom ultimately we have incredible empathy.

This deserves to sell out. Book up fast.