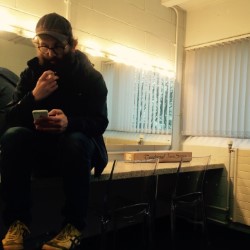 I love Daniel Kitson. He is a clever, innovative and laugh out loud storyteller and we are lucky to be allowed access to his insighful wit and intelligent observations.

However, I think this is the least good show of his that I have seen. Not bad – good, very good. But not great: not as innovative as last year’s Analogue, nor as emotionally connective as The Interminable Suicide of Gregory Church.

The story is of William, a writer who has been working for 12 years on a story that centres around a woman and a mouse with whom she believes she can communicate. William answers the phone in the warehouse which he uses as an office one evening to someone with a wrong number. They start to chat and so begins a discourse on growing up, the defining of friendship groups, loneliness, the need to connect and whether life is defined incrementally or through a serios of key moments that alter everything. It becomes apparent early on that the voice on the other end of the phone is also Daniel Kitson, and as the two parties find an increasing level of similarities in their lives we are drawn into a ‘Sliding Doors’ scenario and the two Williams find the moment at which their lives diverged.

The show is clever, funny and contains the expected subversion of form as Kitson steps out of the play to comment on something that has happened or to berate an audience member for making a noise. However I found I couldn’t really care for William or his life and that lack of emotional engagement meant that the show dragged. It was certainly too long at close to two hours- it would benefit from being trimmed by 20 minutes – something that could be done easliy by cutting out the repetition in the phone calls.

Despite all this the show is still worth seeing. Even slightly off his game Kitson is head and shoulders above most things that you’ll see in Edinburgh this year.