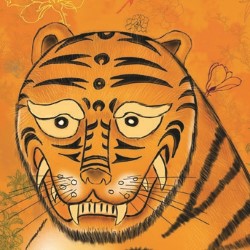 This is a beautiful and engaging piece of theatre that will be enjoyed as much by adults as children.

The story is that of a tiger who is attacking a young woodcutter. The boy tells the tiger that he is his brother and the tiger spares his life. The two become close and the tiger looks forward to meeting his ‘mother’. To endear himself to his new family he collects various meat from around the forest for the dining table. The mother accepts the tiger as her own and the tiger is very happy. Shortly after the mother dies. The tiger is bereft and dies himself, hoping to be reunited with his mother in the next world.

The story sounds very dark but the way in which it is told is anything but. Using traditional Korean storytelling and dramatic traditions the three talented performers use physical theatre, music, masks, clowning and puppetry to tell the tale whilst the mother is rendered beautifully through shadow play. Whilst the words are spoken in Korean there are English summaries at the start of each of the four acts and the production is so strong that you barely notice that you can’t follow what is being said.

This is a performance of great energy and charm. It touches on its themes of loyalty and friendship lightly and manages to incorporate death in a way that was not at all morose or distressing to the children. It is likely to be very different from anything else that you’ll see on the Fringe this year. We loved it and will definitely be back to check out their other shows too. 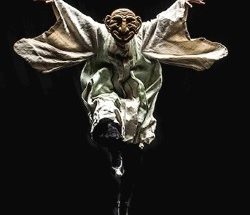