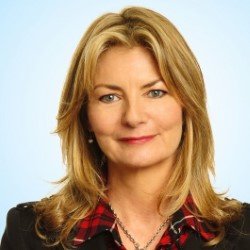 Jo Caulfield has been a mainstay of the comedy world for a while now and her shows are always amongst the first to be on the sell-out boards as it is a sure fire certainty that each one will be a delightfully written, somewhat ascorbic take on life through her eyes and delivered with style as only she can.
And of course the 2017 offering is up to the impeccable high standards she has set herself.
Starting off with local references and how to shop like locals abroad, she talks a lot about her friends girly girls, some back on the dating scene, making changes in lifestyle, and what most women look for in a man, not immediately what I thought though. Names are also important to Ms Caulfield and a certain amount of audience research with her observations led to great hilarity. Subjects such as baby names, difficulty in double dating, and the differences in what the sexes care about are points along the way.
These stories flow seamlessly as like the maestro she is Jo conducts her performance throughout the all too short hour and I know I was not alone in wanting to hear much more. Still that’s for next year I suppose.
*****
Reviewed by Geoff
Stand 6
18.50 to 20.50
Until 27th (not 14th,21st)