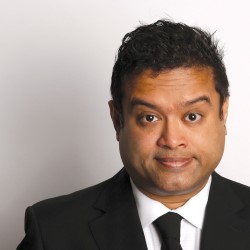 To many I suppose the name Paul Sinha came to their attention when he became a Chaser on ITV’s teatime quiz The Chase. I first saw him in Fringe 2009 and was struck then by the comedic talents he possessed, his funny well-crafted material and the low key delivery style. Although making too infrequent visits to Edinburgh due to other commitments I was delighted to see the comedy skills and writing have been further honed.
Sinha commands the stage from the onset. No strutting and posturing, he takes the sold-out crowd on a journey over the last occasionally traumatic years having filled in the back story of his upbringing, sexuality and career, a story that had both pathos at times, yet was jamb packed with laughs throughout the all too short hour.
Paul relates his experiences in a break up, his quizzing, family trauma and the loss of friends but it is not doom and gloom though, his glass is certainly half full. Often self-deprecating, he relates incidents of how his quote minor celebrity status has got him in and out of scrapes, the loss of musical heroes, outdoor gigs and his new found happiness, but in truth this is only scratching the surface of the show.
This a show that should not be missed but be quick tickets are going quickly.
*****
Reviewed by Geoff
Stand 1
16.55 to 17.55
Until 27th (not 14th)