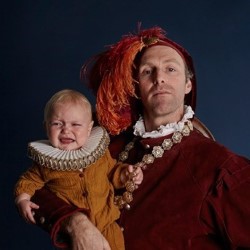 Trygve Wakenshaw, mime and physical comic extraordinaire, versus his own son. It’s not a spoiler to say that there is a real live baby involved in this show – Trygve and Phineas spend the time when the audience are getting seated playing on the stage. It gives time, explains Trygve, for Phineas to get used to the audience. Phineas didn’t seem bothered, ignoring in equal measure and at his own whimsy both his dad and the audience.

It also isn’t particularly ‘versus’ either – Trygve has some ideas he’d like to play around with (being a spider, a vampire, preparing for a boxing match, open heart surgery), and in which Phineas is invited to take part. There was no coercion here, so I felt that my ethics hackles could settle. At least one sketch didn’t finish as planned simply because Phineas didn’t want to.

Trygve is an immense physical (and vocal) comedian, though the material in this show was perhaps simpler and more adaptable than a show without a baby in it would normally be. Taken for what it is – a love letter to his own son – this show is lovely.