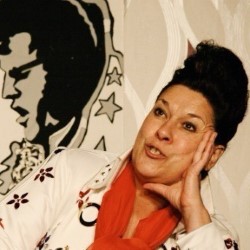 Joan and her pal Marina love to compete in the weekly Karaoke competition run by DJ ‘Fat Bob’ in Aberdeen. Joan develops an abiding love for Elvis and with growing confidence, and an Elvis stage costume, she plans to take Aberdeen, Memphis and the world by storm. The fact that she is female and imbues every song with a strong Doric twang doesn’t puncture her belief in herself. At home, her disabled mother constantly tries to dent her ambitions with a fruity turn of phrase, but, with encouragement from her new found cyber love Robert, Joan is determined to win Ultimate Elvis and achieve all of her dreams.
This was a hugely enjoyable hour. Joyce Falconer’s renditions of Elvis songs were hilarious and brought the house down. The audience were rooting for Joan all the way, and every time her acid tongued mother entered the action we couldn’t wait her wonderfully acerbic put downs. I worried that the Doric language would bamboozle the audience, but nobody seemed to have a problem picking up the gist and, by the end, everyone was belting out the songs along with Joan. I urge everyone to pop along for the best Elvis fix at this year’s festival.
Reviewed by Rona
Gilded Balloon Rose Theatre
7.30pm
Until the 26th (not 20th)